Pectus excavatum (a Latin term meaning hollowed chest) is the most common congenital deformity of the anterior wall of the chest, in which several ribs and the sternum grow abnormally. This produces a caved-in or sunken appearance of the chest.  It can either be present at birth or not develop until puberty. 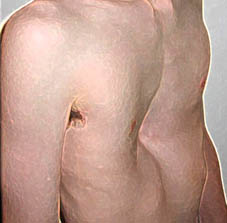 Pectus excavatum is sometimes considered to be cosmetic; however, depending on the severity, it can impair cardiac and respiratory function and cause pain in the chest and back.  People with the abnormality may experience negative psychosocial effects, and avoid activities that expose the chest.

Pectus excavatum is sometimes referred to as cobbler's chest, sunken chest, funnel chest or simply a dent in the chest.

Pectus excavatum occurs in an estimated 1 in 150-1000 births, with male predominance (male-to-female ratio of 3:1). Occurrences of the condition in family members have been reported in 35% to 45% of cases.

The hallmark of the condition is a sunken appearance of the sternum. The heart can be displaced and/or rotated. Mitral valve prolapse may also be present. Base lung capacity is decreased.

Researchers are currently unsure as to the actual cause of pectus excavatum but hypothesize genetic defect. Approximately 37% of individuals with pectus excavatum have a first degree family member with the condition. Physiologically, increased pressure in utero, rickets and increased traction on the sternum due to abnormalities of the diaphragm have been postulated as specific mechanisms. Pectus excavatum is also a relatively common symptom of Marfan syndrome. Many children with spinal muscular atrophy develop pectus excavatum due to the diaphragmatic breathing that is common with the disease. Pectus excavatum also occurs in about 1% of persons diagnosed with Celiac disease for unknown reasons.

Pectus excavatum is initially suspected from visual examination of the anterior chest. Auscultation of the chest can reveal displaced heart beat and valve prolapse. There can be a heart murmur occurring during systole caused by proximity between the sternum and the pulmonary artery. Lung sounds are usually clear yet diminished due to decreased base lung capacity.

Chest x-rays are also useful in the diagnosis. The chest x-ray in pectus excavatum can show an opacity in the right lung area that can be mistaken for an infiltrate (such as that seen with pneumonia).  Some studies also suggest that the Haller index can be calculated based on chest x-ray as opposed to CT scanning in individuals who have no limitation in their function.

Treatment for pectus excavatum can involve either invasive or non-invasive techniques or a combination of both. Before an 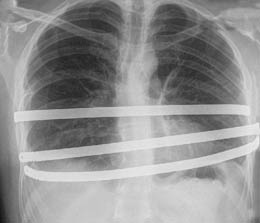 operation proceeds several tests are usually to be performed. These include, but are not limited to, a CT scan, pulmonary function tests, and cardiology exams (such as auscultation and ECGs).  After a CT scan is taken the Haller index is measured. The patient's Haller is calculated by obtaining the ratio of the transverse diameter (the horizontal distance of the inside of the ribcage) and the anteroposterior diameter (the shortest distance between the vertebrae and sternum).  A Haller Index of greater than 3.25 is generally considered severe, while normal chest has an index of 2.5.  The cardiopulmonary tests are used to determine the lung capacity and to check for heart murmurs.