Pectus carinatum, also called pigeon chest or just "PC", is a deformity of the chest characterized by a protrusion of the sternum and ribs. It is the opposite of pectus excavatum.

Pectus carinatum is an overgrowth of cartilage causing the sternum to protrude forward. It occurs in 3 different ways. The least common way is post surgically after open heart 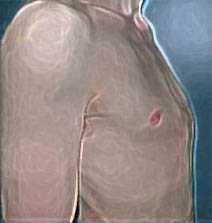 surgery. Sometimes the sternum does not heal flat and there is a protrusion of the sternum. The second most common is from birth. It is evident in newborns as a rounded chest and as they reach 2 or 3 years old the sternum begins to grow outwardly even more. The most common occurrence for pectus carinatum seems to be in the 11-14 year old pubertal male undergoing a growth spurt. Some parents report that their child's pectus seemingly popped up 'overnight'.

In about 25% of cases of pectus carinatum, the patient has a family member with the condition.

People with pectus carinatum usually develop normal hearts and lungs, but the deformity may prevent these from functioning optimally. In moderate to severe cases of pectus carinatum, the chest wall is rigidly held in an outward position. Thus, respirations are inefficient and the individual needs to use the diaphragm and accessory muscles for respiration, rather than normal chest muscles, during strenuous exercise. This negatively affects gas exchange and causes a decrease in stamina. Children with pectus deformities often tire sooner than their peers, due to shortness of breath and fatigue. Commonly concurrent is mild to moderate asthma.

Some children with pectus carinatum also have scoliosis (curvature of the spine). Some have mitral valve prolapse, a condition in which the heart mitral valve functions abnormally. Connective tissue disorders involving structural abnormalities of the major blood vessels and heart valves are also seen. Although rarely seen, some children have other connective tissue disorders, including arthritis, visual impairment and healing impairment.

Apart from the possible physiologic consequences, pectus deformities can have a significant psychologic impact. Some people, especially those with milder cases, live happily with pectus carinatum. For others, though, the shape of the chest can damage their self-image and confidence, possibly disrupting connections and causing them to feel uncomfortable throughout adolescence and adulthood. As the child grows older, especially if male, bodybuilding techniques may be useful for balancing visual impact.

Pectus deformities usually become more severe during adolescent growth years and may worsen throughout adult life. The secondary effects, such as scoliosis and cardiovascular and pulmonary conditions, may worsen with advancing age.

Body building exercises (often attempted to cover the defect with pectoral muscles) will not alter the ribs and cartilage of the chest wall, and are generally considered not harmful.

Fortunately, most insurance companies no longer consider chest wall deformities like pectus carinatum to be purely cosmetic conditions. While the psychologic impact of any deformity is real and must be addressed, the physiological concerns must take precedence. The possibility of lifelong cardiopulmonary difficulties is serious enough to warrant a visit to a thoracic surgeon.

In children up to age 18 who have mild pectus carinatum and are motivated to avoid surgery, the use of a custom-fitted chest-wall brace pushing directly on the sternum produces excellent outcomes. Willingness to wear the brace as required is essential for the success of this treatment approach. The brace works in much the same way as orthodontics (braces) works to correct the alignment of teeth. It consists of front and back compression plates that are anchored to aluminum bars. These bars are bound together by a tightening mechanism which varies from brace to brace. This device is easily hidden under clothing and must be worn from 14 to 24 hours a day. The wearing time varies with each brace manufacturer and managing physicians protocol and depending on stage of correction and the treatment protocol employed. The brace is usually worn over the top of a singlet to prevent skin breakage and also to reduce the rubbing. Parents learn how to check to see if adequate pressure and correct position of the brace is being utilized. Bracing is becoming more popular over surgery. Family physicians can monitor patients during the bracing period, in addition to supervision by a pediatric surgeon at regularly scheduled office visits.

Research from 2006 supports real-world success with patients in the Clinic. "Compressive bracing results in a significant subjective and objective improvement in PC appearance in skeletally immature patients. However, patient compliance and diligent follow up appear to be paramount for the success of this method of treatment. Further studies are required to show the durability of this method of treatment."

For patients with moderate to severe pectus carinatum, surgery may be necessary. The two most common procedures are the Ravitch and the Ambramson Technique (like a reverse Nuss which uses a bar to press the sternum in instead of out).

After adolescence, some males use bodybuilding as a means to hide their deformity, where women find that their breasts, if large enough, serve the same purpose. Some plastic surgeons perform breast augmentation to disguise mild to moderate cases in women. Bodybuilding is suggested for people with symmetrical pectus carinatum.